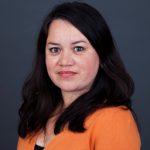 a We use “Hispanic” and “Latino” interchangeably. Consistent with the U.S. Census definition, this includes individuals who have origins in Mexico, Puerto Rico, and Cuba, as well as other “Hispanic, Latino or Spanish” origins.

b All lists of states in this paragraph are ordered by percentage of the state’s child population that is Hispanic.

4 in 10 Latino and Black households with children lack confidence that they can make their next housing payment, one year into COVID-19

During COVID-19, 1 in 5 Latino and Black Households with Children Are Food Insufficient